Leap for Joy! This is the Day the Lord hath made!

The other day on FaceBook I watched a video of a funny little herd of kids (baby goats not to be confused with human children…LOL).  Delighted I watched as they bounced across the ground stiff legged, twisting and turning as they went.  My heart swelled with the sudden understanding that the “kids” were filled with the joy of simply being alive on a beautiful spring day.

The master of the flock was a young man.  The “kids” would pile up around him so he could reach down and pick each one up and give them a hug.  Then they would run off for the day and several others would vie for his attention until each one got a hug.  Isn’t that what our relationship with God should be?  Every day our hearts should be filled with joy to wake up alive in the morning and receive our daily hug from God.  May God bless your day!

Our American Way of Life

Last Wednesday on my way to work on Longboat Key I was listening to a DJ  interview one of our armed force heroes asking him questions about military life.  The young man shared that he was

preparing to deploy to Afghanistan.  The DJ asked him, “How do you prepare to deploy?”  He answered, ” I get my will and papers in order to take care of my wife and family…..”  He went on with other details but his first words deafened me to anything else he had to say.  Here I was driving along through paradise, heading to a high rise condo on the beach to paint furniture, one of my favorite things to do.  This young man was headed to a war torn country with the thought that he quite possibly would lose his life leaving his wife and children all alone.  I felt ashamed of how much I take for granted.

Unless you have been in the military or are the family of someone in the military, most of us go along with our daily lives never giving a second thought about those putting their lives on the line every day. This Fourth of July we all need to take a moment from our joyful Fourth of July  celebrations and give thanks to God for the brave men and women who fight and have fought to assure our freedom and our American way of life.  God bless our troops!

In 2013, I wrote this blog post.  In a world full of darkness we need to look for the light in those people who are beautifully human to each of us.

2013 – A couple of weeks ago my husband and I took our grandson to see “The Hobbit.”  One of the movie trailers before the show started was for the new Superman movie……and WOW!  The special effects were so compelling and dramatic it overwhelmed me.  Fixated on that beautiful, super-human alien, my mind quickly wandered to how we all look to super heroes in movies, books and comic books to give us hope and help us feel that everything’s gonna be all right.  At first I thought to myself, why can’t humans be that way?  Immediately thoughts flashed through my mind that humans ARE that way.  We just need to think about who in our lives has been that touchstone…that beautifully human person who brought us joy and laughter.  Someone who entered our life with or without fanfare and left behind their essence of goodness through thought or deed.  Because of this human’s very existence your own life became better.

My Great Grandpa Hempy, bless his heart, was one of mine.  He was about 5′ 2″ tall, plump and had a thick white shock of hair.  Sugar was his vice.  He would make toast with milk and then load it with sugar.  If Grandma sugared it ahead of time…he would sugar it more. He sugared his applesauce and sugared his watermelon.  He even sugared his ice cream and lived to the ripe old age of 96 with no signs of diabetes!

Grandpa especially loved the little children of the family. I remember sitting on 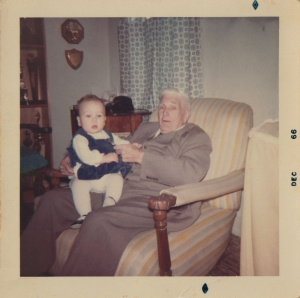 his lap or at his knee while he told my sister and I stories of days gone by with his 15 brother’s and sisters.  He sang songs to us in a real high voice and would recite ancient poems which I only remember snippets of …there was a skunk on the wall blowing his nose…and a grasshopper dressed in soldier’s clothes. He loved to garden and raised the ripest, sweetest muskmelons and black raspberries you ever ate. He worked hard, he laughed hard and loved a lot!

(Photo to right was my cousin’s daughter)

In his “retirement years” he became intrigued with perpetual motion and had my Grandpa Blauser build a wooden wheel on a stand in the basement.  Then he carefully attached Grandpa B’s empty pipe tobacco cans and loaded them with varying amounts of bolts and nuts to get it balanced enough to spin by itself and never stop.  He worked on it for years.  Every time our family would go over we all went to the basement to see his invention and his progress.  Even though he never perfected his perpetual motion machine before he died, his belief  that it eventually could be done helped me form the notion that anything is possible and to never give up.

About a year before he died I remember the day he told me that he was ready to die.  At the age of 8 and never having dealt with a death of someone I knew personally, I was crushed.  It was hard for me to comprehend that I would ever have to live life without him.  He gently explained to me that he was old and he was tired.  He had outlived all of his siblings and friends.  Born right after the civil war he had lived a long and wonderful life….and he was to ready rest in the arms of his Maker.  He was a gentle spirit, strong in body and strong in faith…and for me he will always be beautifully human.