BEWARE OF Refresh-Interiors, Inc., Gene Mc Donald. A tale of a scam artist.

This blog is being written to share our story of being conned out of $6500.00 by Gene McDonald-Refresh-Interiors, Inc. My husband and I are retired from the same type of home decor industry.  We always operated our business with integrity and honesty consistently making people happy.  Because of our business ethic we were naive and fully trusted Gene McDonald of Refresh-Interiors, Inc. to do the job we paid him in full to do.  We should have noted all of the red flags, but having never been scammed, we threw caution to the wind with thoughts of beautiful custom countertops that would enhance our home.  The following story is what has happened to us.

On May 2, 2017, my husband and I contracted Refresh Interiors, Inc., Gene McDonald, of St. Petersburg, Florida, to make custom countertops for our kitchen.  He was late meeting us at his place of business which had a commercial rental sign in front of it.  We were about to leave when we got a phone call from him saying he had truck problems but would be there in  a few minutes.  He finally got there and was apologetic for being late.  Inside his place there were all kinds of counter samples and trophies, etc. The workshop was a mess, but we know what that is like.  He kept trying to sell us pieces that were already done in the back, but nothing fit our space.  He showed us samples of countertops and then a sample he had poured in a bucket.  It was swirled with metallics and looked beautiful.  I decided that was what I wanted for the kitchen.  Next came the dickering on the price.  He said the counters would be $7155.00 and asked for a $5000.00 deposit…but if we paid cash he would discount the price to $6500.00.  Having worked in a similar business the price sounded fair….and it was going to be a deal! In good faith, we gave him a check for $6500.00.  He made an appointment with us to be at our home the following Monday to take measurements and make templates.  We shook hands and parted company.

After leaving Refresh-Interiors, Inc., we went to a local restaurant to celebrate the thought of having such a beautiful kitchen.  While we had our drinks,  my husband got a phone call from Mr. McDonald on our cell phone saying that we might get a call from a check cashing place because he was so excited to get started that he wanted to buy the supplies right away and could not wait on the three day hold at the bank. Our scam alert antennae tingled a little bit, but still the excitement of having one of a kind artsy counters outweighed our common sense.

Monday came and Mr. Gene McDonald of Refresh Interiors, Inc., did not show up or call to let us know he wasn’t coming.  Now we were starting to get worried. Bob called him and received the disheartening information that the business number had been disconnected.  We e-mailed and texted him on a phone number he had given my son with no answer.  After a couple of days, he finally did call, apologized and gave us a new phone number saying he had to replace his broken phone.  He scheduled to come to our home on Thursday of that week.

Wednesday he called to say he could not make it on Thursday but he could be there on Friday.  Friday morning he called apologizing up and down once again and promised to be there on Saturday.  Saturday early morning he called and said his aunt had an auto accident.  Could he come on Sunday.  Sunday was Mother’s Day, but we were sitting here with our counters looking as they do below. 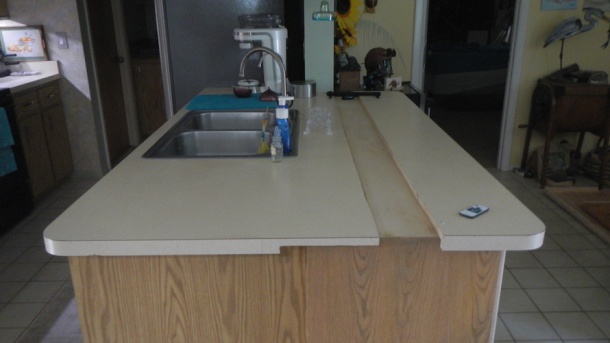 Mother’s Day he and his wife, Joellen came.  He busied himself with making the templates and she chatted with us.  They both seemed nice which falsely put us at ease.  Before he left, he promised he would make an actual sample of the countertop material and we could come up on Tuesday, May 30, 2017 to see the sample and the base layer of the countertops.  Monday came.  He called to cancel the appointment.  By this time we were getting fed up.  My husband told him we needed to have these countertops ASAP or we wanted our money back.  Gene promised to e-mail pictures of the started countertops on the next Sunday then would install the finished countertops the following Friday.  For two weeks after that conversation, we had no further contact from him.  He would not answer our phone calls, texts or e-mails and his inbox was full most of the time.

In the interim we dug deep investigating him.  Along with a long arrest record of other unrelated infractions, we found complaints for counter jobs that were never completed.  For some odd reason these had not shown up in our previous searches. One resolved complaint was for taking $22,000.00 for a job then deciding he couldn’t do that job.  After several months of bugging him the client finally did get his money back.  As the history of Refresh-Interiors unfolded we found a second person he owed $8100.00 for a job he promised eight months previously and never completed.  He made all kinds of excuses to them (like he has to us) one of which was his tools were “stolen”.

Bob and I decided right then that this scammer had to be stopped.  He was taking money for jobs with no intention of doing the work and then paying minimal amounts to others that were on his back for their money.  This man gives contractors a bad name, so Bob and I decided to pull down the tents of his side show.

First we hit all of his social media making posts as to where our counters were and when was he going to give us back our money.  We posted our story on YELP, the BBB and Rip Off Report.  We reported him to Seniors vs Crime, Florida Attorney General, Pam Bondi and the Pinellas County Consumer Protection. We were beginning to lose heart that there was no one who cared to help us.  ABC news had done a promotion feature on him that was posted on his website.  We contacted them with our story and the post was taken down soon after. Finally we were contacted by Pinellas County Consumer Protection who have done an awesome job in stopping this thief even if it’s only for a jail term.  It has taken months of investigation on their part.  It went to pretrial several times and then finally went to court.  Mentally we released it all to God.  This was in his hands now.  We were done, even if we never received a cent we felt justice was being served.

February 19, 2019, we received our first check from the Florida Department of Corrections Court Ordered Payment Fund.  Every month after that we were doing our Florida happy dance.  As time went on there were occasional lulls in payments and we would think maybe we had received the last payment.  We simply thanked God for what we got and went on with life.

Final update:  In June of 2021, we did our final Florida happy dance.  We received the last payment of the $6500 deposit we had made to Mr. McDonald.  It took four years to get our money back, but through God’s grace and the Pinellas County Consumer Protection Agency we got it all.

And what happened to the counters that never got done by Mr. McDonald?  Bob and I did them ourselves, which is what we should have done in the first place.  It cost us around $300 and looked like beautiful custom counters.  We have since sold the house and moved to Georgia leaving those counters in the hands of new owners.

I am leaving this blog up just in case Mr. McDonald ever tries scamming someone again.  The sad thing is if you are googling his name to find out what’s up with him and why isn’t he doing my counters, it is probably too late….you’ve been scammed.  We were very fortunate in finding the right people to help us.  It is an infuriating experience to have to deal with being scammed. We felt stupid and incredibly angry over it all. A sign hangs over my husband’s computer to remind us….Trust No One.  It’s as true for things that sound too good as it is for the internet.